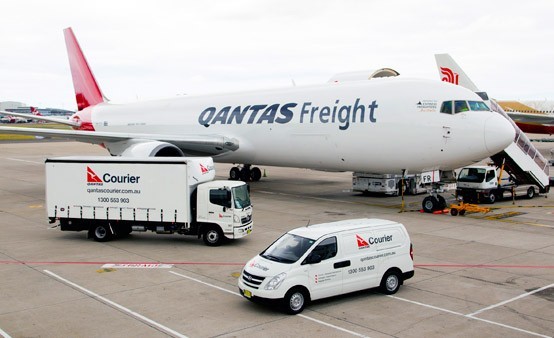 Within these cargo terminals Qantas Freight operates a fleet of specialist materials handling equipment in excess of 130 vehicles. These range in size, application and capabilities from 1.8T IC forklifts to 16T units.

According to manager, safety and environment John Cree, the goal for Qantas Freight and Adaptalift when renewing the MHE fleet was to improve all aspects of the fleet’s management, from an OH&S and environment perspective right through to driving a reduction in avoidable damage and improving operational efficiency. A key to achieving this goal was the utilisation of Adaptalift’s ForkTrack™ fleet management system.

From a traffic management perspective, Qantas Freight had identified several areas within their unique business environments that needed special attention and additional controls.

Due to the layout of some of its terminals, Qantas Freight was not able to physically separate MHE and people and so other, higher order controls were sought.

Qantas Freight wished to implement speed controls in compliance with the recommendations of the Monash University Accident Research Centre in the areas where people and mobile plant worked most closely together. However, it also wanted a system that complimented driver skills and ensured control over high-risk activities.

Adaptalift’s ForkTrack™ zone system was able to seamlessly adjust the maximum operating speed of equipment in the different parts of the warehouse based on minimum breaking distances, operational requirements, traffic flows and usual operating loads. 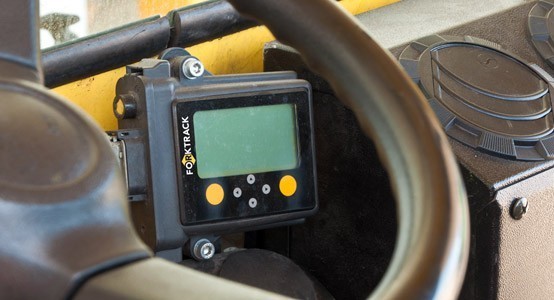 One of the most difficult aspects of operating a fleet of MHE is how to accurately control who can operate the equipment. In the environment that Qantas Freight operates this requirement takes on a whole other level of complexity, as all operations generally occur in the secure airside area of the airport.

All employees are required to hold a valid Aviation Security Identification Card (ASIC), and as such, Qantas Freight and Adaptalift established that the ASIC system seemed the obvious choice for identifying operators authorised to use the MHE fleet.

“It was a real accomplishment for Adaptalift and Qantas Freight to achieve the co-operation of all parties to obtain the authority to install the same access readers associated with the airport onto our fleet”, commented Mr Cree.

With this swipe access, Qantas Freight is able to ensure operator compliance with training, procedural and security processes, while reducing the cost of implementation and ongoing maintenance.

“Authorised operators are required to swipe onto each piece of equipment prior to start, and the equipment is designed to automatically time out when the operator leaves the equipment. The system can also be used to restrict equipment operation to only those with the required licence and current training”, he said.

With the majority of the Qantas Freight fleet operating within close proximity of multi-million dollar aircraft, the elimination of collision incidents is an area afforded huge focus.

Qantas Freight’s fleet incorporates the ForkTrack™ remote impact detection system which constantly monitors individual equipment events above a pre-prescribed threshold. Should an event be detected, the onboard console notifies the operator, and simultaneously dispatches an email describing the event to the relevant management staff.

In event of an impact the system, much like a black box recorder on one of the group’s jets, is able to provide management staff with the information such as equipment and operator ID, date and time of the event, control settings and speed and direction of travel prior to the event.

The system is even able to affect a controlled vehicle shutdown according to the pre-determined impact threshold levels.

With the information provided by the ForkTrack™ system, a clear picture of the incident is able to be created and a thorough investigation of the cause of the impact conducted.

According to Qantas Freight’s John Cree, the response to such investigations and sharing of experiences has been well received by the workforce and has resulted in some terminals being able to record a substantial reduction in serious impact events since the fleet’s introduction.

“What our experience has been able to show is that as a business we do not have to accept that impacts and avoidable damage will always happen. With the right equipment, transparent controls, timely reporting and employee cooperation serious issues of avoidable damage can be virtually eradicated.”

Adaptalift’s ForkTrack™ system used by Qantas Freight also incorporates an on-screen pre-operational checklist that is completed prior to the commencement of each shift. 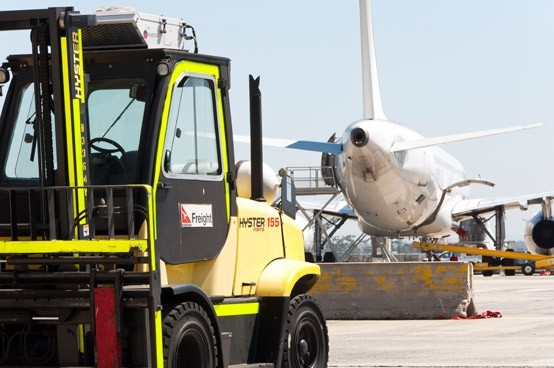 The system automatically reports equipment prior to it being used. Completed checklists and fault reports are emailed, with information on the issue, to relevant parties for immediate resolution.

“The time between an issue being noted and a technician being made aware of it can be as little as a few minutes, which improves both the potential downtime on the equipment and the efficiency of the reporting system as a whole”, said Mr Cree.

“We also have the added advantage of being able to store completed checklists electronically for auditing purposes, and can easily track and report on any attachments or modifications made to individual units.”

ForkTrack™ also incorporates a digital load weight indicator to advise the operators on loads being carried or attempted. The capacity of the equipment is pre-set in the system and an overload warning sounds, should the weight be exceeded.

Through an online dashboard, the ForkTrack™ system provides Qantas Freight with real-time reporting on equipment utilisation, operational trends and checklist compliance, allowing both mandatory and performance reporting to be completed quickly and simply. Access to information is vital for any system and ForkTrack™ gives Qantas Freight the information it needs to always improve its operations.

According to Mr Cree, Qantas Freight also uses this data for positive reinforcement of behaviours by recognising outstanding operators through its recognition programs.

“In order to achieve employee engagement and understanding around the introduction of this system, it was important for us to demonstrate it is not just about monitoring and reporting improper usage, but it can also be used to recognise and reward appropriate behaviours,” he said.
An ongoing relationship

Since introducing its Hyster MHE fleet in 2009 and utilising Adaptalift’s ForkTrack™ system, Qantas Freight has seen a significant number of operational improvements.

Qantas Freight and Adaptalift maintain regular operational meetings providing a forum where new MHE developments can be brought to the table and both parties can work together to design improvements and solutions to real-life problems that arise from the field. This close partnership has led to a significant number of advancements over the past three years and has been of great benefit to both parties, who are very excited to see what future technologies. 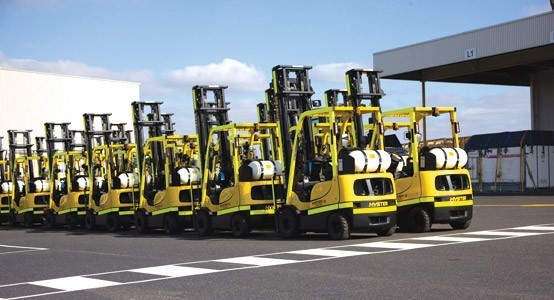