Today we dive into specific terminology you will need to know about forklift stability & manoeuvrability.

When working with loads the stability of your forklift is one of the most important aspects you should be aware of. Below are a few features you should keep in mind.

The maximum weight (materials) a forklift can carry at a given “load centre”, with the mast held in a vertical position. The load rating is usually expressed in kilograms or pounds and the standard load centre in millimetres or inches. This will be presented on the rating plate which was shown in the forklift diagram in Part 1. 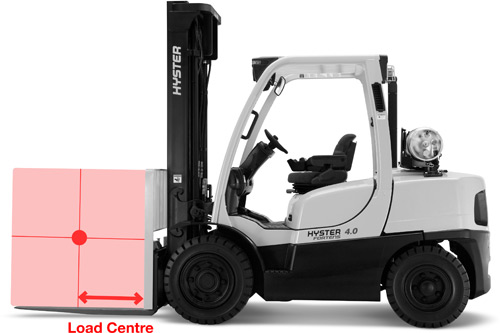 Manoeuvrability is an extremely important topic that must be covered and understood when researching and learning about forklifts as it is typically overlooked until it is too late.

The tilting angle is the maximum angle in which a mast can tilt forward and backward. The tilting angle varies when dealing with different forklifts, masts and attachments and is also limited at high mast to maintain truck stability. This is useful to know as depending on what materials you are carrying, you may require a higher tilt angle to ensure stable manoeuvrability and avoid any loss of loads.

The right angle stacking aisle is the terminology to describe the amount of load a forklift can carry and turn to a 90 degree angle. When dealing with racking and loading your materials on to shelves this is the most important piece of information you need to know, as it will tell you the maximum load you can carry, it can also help by telling you the distance in which your shelving needs to be apart.

The angle of a ramp/slop a forklift can travel up/down on. An important factor to take in to consideration is whether you forklift is carrying a load or not which will affect the gradeability.

After reviewing or learning this basic terminology above you can begin to create questions for yourself to see what you require out of a forklift in your workplace. It is also a great starting point to learn more by perhaps asking your local forklift dealer a few questions that you have trouble answering yourself.

Next week will be Part 4 of our Forklift Terminology Series which goes in to types of tyres and forklifts.