May 2012 by Paul Hinz
Filed under: Technology 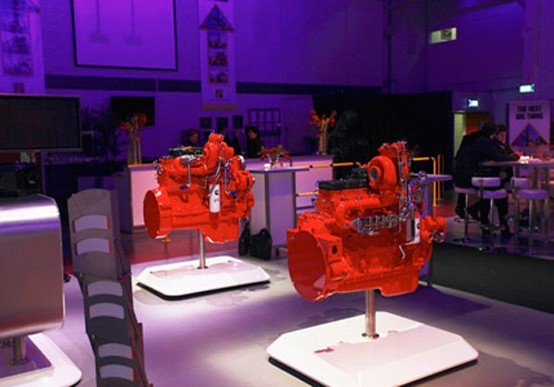 What are the requirements?

The new requirements mean that diesel engines must cut Particulate matter (PM) emissions by 90%, an emission composed primarily of carbon soot and other combustion by-products, and Oxides of Nitrogen (NOx) by 45%, an emission composed of nitrogen and oxygen. This means manufacturers will have to develop significantly cleaner engines that are more fuel efficient and cleaner burning.

The emissions standards for these power categories are: 2.0g/kW-hr Oxides of Nitrogen (NOx) and 0.02 g/kW-hr Particulate Matter (PM).

What’s interesting is that carbon dioxide (CO2) is not actually regulated in the Tier 4 Interim regulations, but it looks like manufacturers are rising to the challenge. Cummins QSB and QSL engines are more fuel efficient by up to 15% and hence result in substantial CO2 reduction.

What are future requirements?

In 2014, the EPA will introduce Tier 4 Final which will require another major emissions reduction for off-highway diesel engines. Tier 4 Final will first come into effect on the 130-560KW engine category, requiring a further 45% NOx reduction. This will result in a total emission reduction of 90% NOx and 90% MP compared with Tier 3 Standard. These extremely low levels can be described as “near zero” emission levels according to Cummins.

The emissions standards for this power category are: 0.4g/kW-hr Oxides of Nitrogen (NOx) and 0.02 g/kW-hr Particulate Matter (PM) effective January 2014.

How are engine manufacturers meeting the standards?

There are 3 key approaches for meeting the Tier 4 Interim emissions standards. Here’s how they work:

Here is a summary of the enhancements and changes that Hyster and Cummins have made to meet Tier 4.

The key components of the Cummins cooled EGR system are: 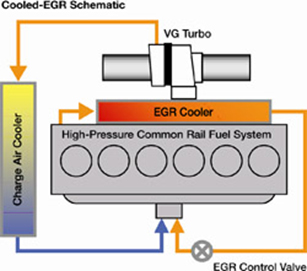 The Variable Geometry Turbocharger (VGT) uses a sliding nozzle, which controls the exhaust flow into the turbine wheel; delivering rapid boost at lower engine rpm and then maintains high boost at higher rpm. The system also incorporates a larger and smaller turbocharger in a single unit, achieving significantly improved response.

Cummins Particulate filters reduce Particulate Matter (PM) emissions by 90%. It replaces the Tier 3 muffler, providing equal if not better sound reduction. The Particulate filter collects carbon and other soot on the walls of the filter. The filter also has self-regenerating features; when sufficient exhaust temperatures are met the filter oxidizes particle matter.

Cummins air filtration works as a 2-stage system with Sy-klone per-cleaner removing up to 80% of contamination in the first stage. After the pre-cleaner stage the Cummins Direct FlowTM air filter removes the remaining particles. 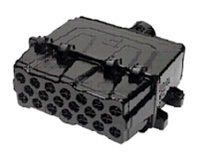 Developed specifically for Tier 4 Interim to provide more performance with a lower profile design saving up to 50% more space. The air cleaner uses a highly-efficient coalescing filter and crankcase ventilation system manufactured by Cummins Filtration. Air flow to the engine is improved with almost 100% efficiency over the life of the filter.

The filter also features temperature barometric and atmospheric pressure sensors that provide data to the engine control module. A secondary safety filter is also fitted, that ensures protection of the engine if the main filter becomes compromised.

Another requirement of Tier 4 Interim is that the crankcase emissions be eliminated. Cummins achieved this by using a highly efficient coalescing filter. The filter returns the oil to the crankcase, and also provides the benefit of removing oil mist and small oil droplets, resulting in an even cleaner engine and powertrain.

The normal operating mode is set to HiP (high performance), but when ECO-elo mode is turned on the maximum engine speed is reduced and the engine response becomes less aggressive, resulting in reduced fuel consumption with barely noticeable performance loss.

This system will be combined with Hyster advanced cooling on demand and alternate engine idle speed, load sensing hydraulics, and RPM management, which contributes to additional fuel savings of up to 15%.

Key features: Hyster trucks with Tier 4 Interim compliant engines can achieve up to 15% better fuel consumption, resulting in up to 30% fuel saving when combined with both Cummins and Hyster technology, while also providing significantly better engine response and reliability.

Below is a diagram from Cummins showing the difference between the Tier 3 engines and the Tier 4 Interim engines. As shown below the muffler is replaced by the Diesel Particulate Filter (DPF) which also acts as a muffler; plus the addition of the Exhaust Gas Recirculation (EGR) system.

Also seen below is the Cummins presumed solution to Tier 4 Final, with the addition of Selective Catalytic Reduction (SCR) that is attached after the EGR. 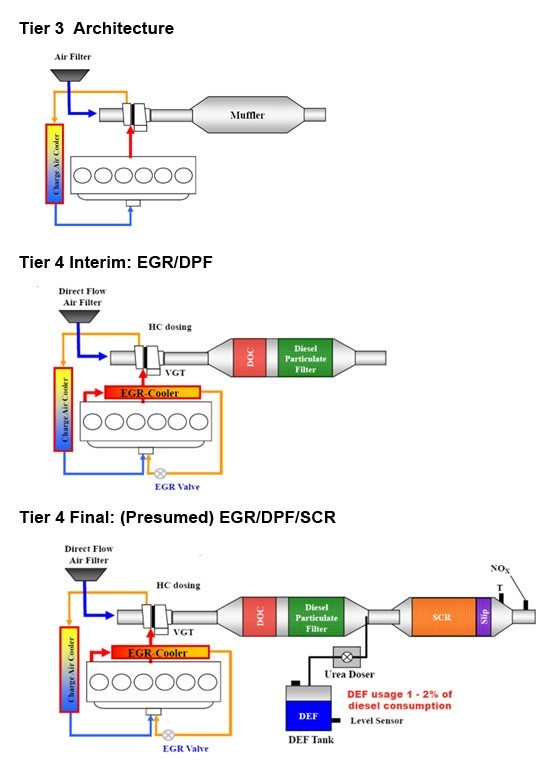 Models that will benefit:

The following model series are affected by the legislation and will benefit from the new Cummins engines and Hyster engine technology: